When you see an Indian bride, you immediately notice the intricate hand painting called bridal mehndi. The mehndi itself is applied to the bride’s hand, arm and feet during the mehndi ceremony. The mehndi ceremony is one of the most fun-filled and glamorous pre-wedding celebrations that take place a day or two prior to the wedding. It is considered to be the oldest wedding traditions and rightly so as it dates back to centuries and has a deep-rooted cultural significance. 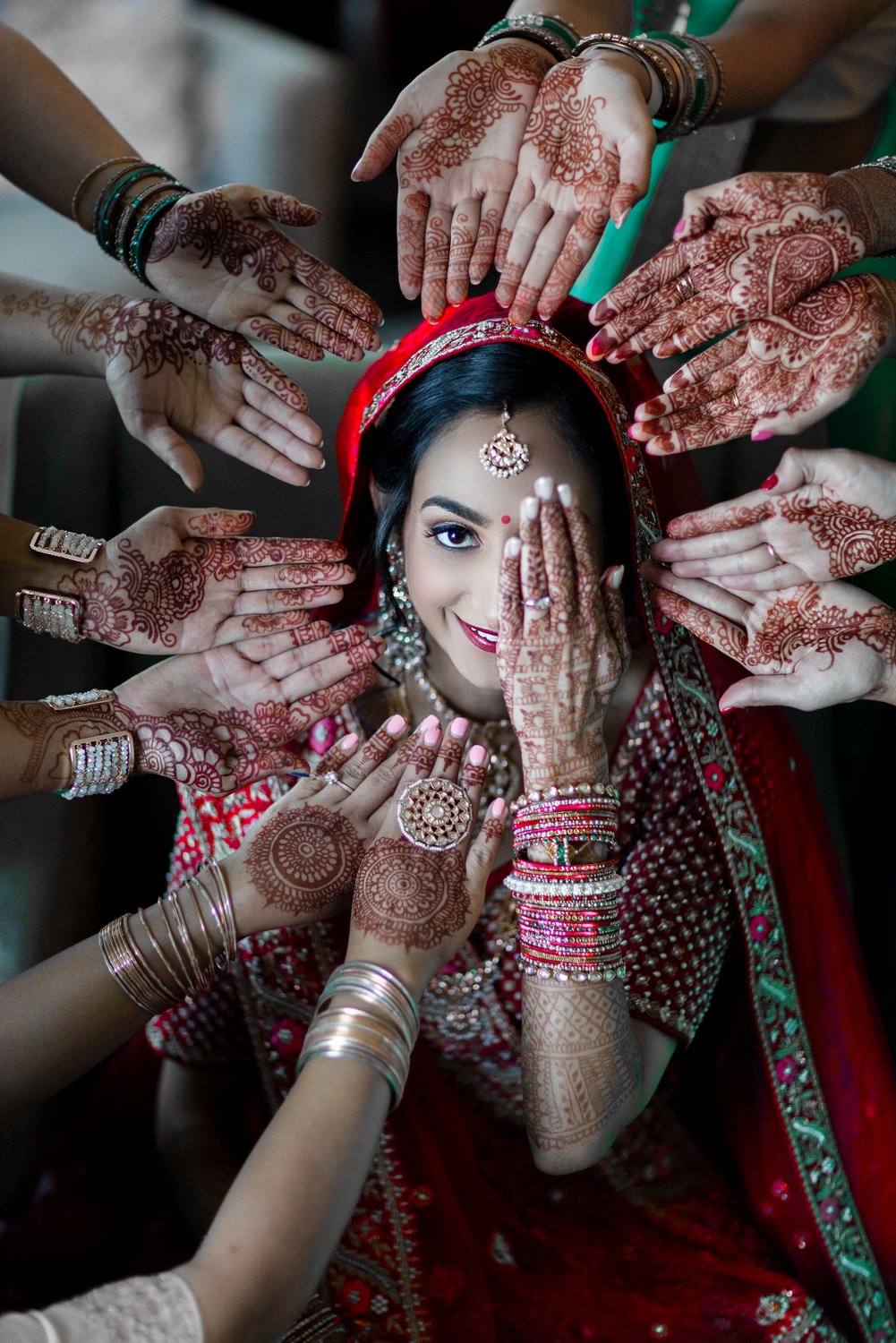 Traditionally, Mehndi is the art of painting of hands, feet or body with a paste made from the powdered, dried leaves of henna plant called Lawsonia Inermis. The Hindi and Arabic word Mehndi is derived from a Sanskrit word â€˜mendhikaâ€™ which refers to the henna plant itself. Henna powder is mixed with water to form a thick paste and this paste is then squeezed through the tip of a cone to draw patterns on skin. The designs are left to dry for 3-4 hours until it becomes hard and crusted. Its stain is usually beautiful a cherry- red to brown colour and varies with the time left on and a range of other factors. From prehistoric times the paste from henna plant has been used to provide relief from the diseases related to the blood circulation and various other pains. During weddings, the mehndi paste is further enhanced with the use of eucalyptus oil, clove oil and lemon juice which not only infuse an aroma in the mehndi paste but also enhance the healing abilities. In addition to all these health benefits, the smell of the mehndi acts as a powerful aphrodisiac. 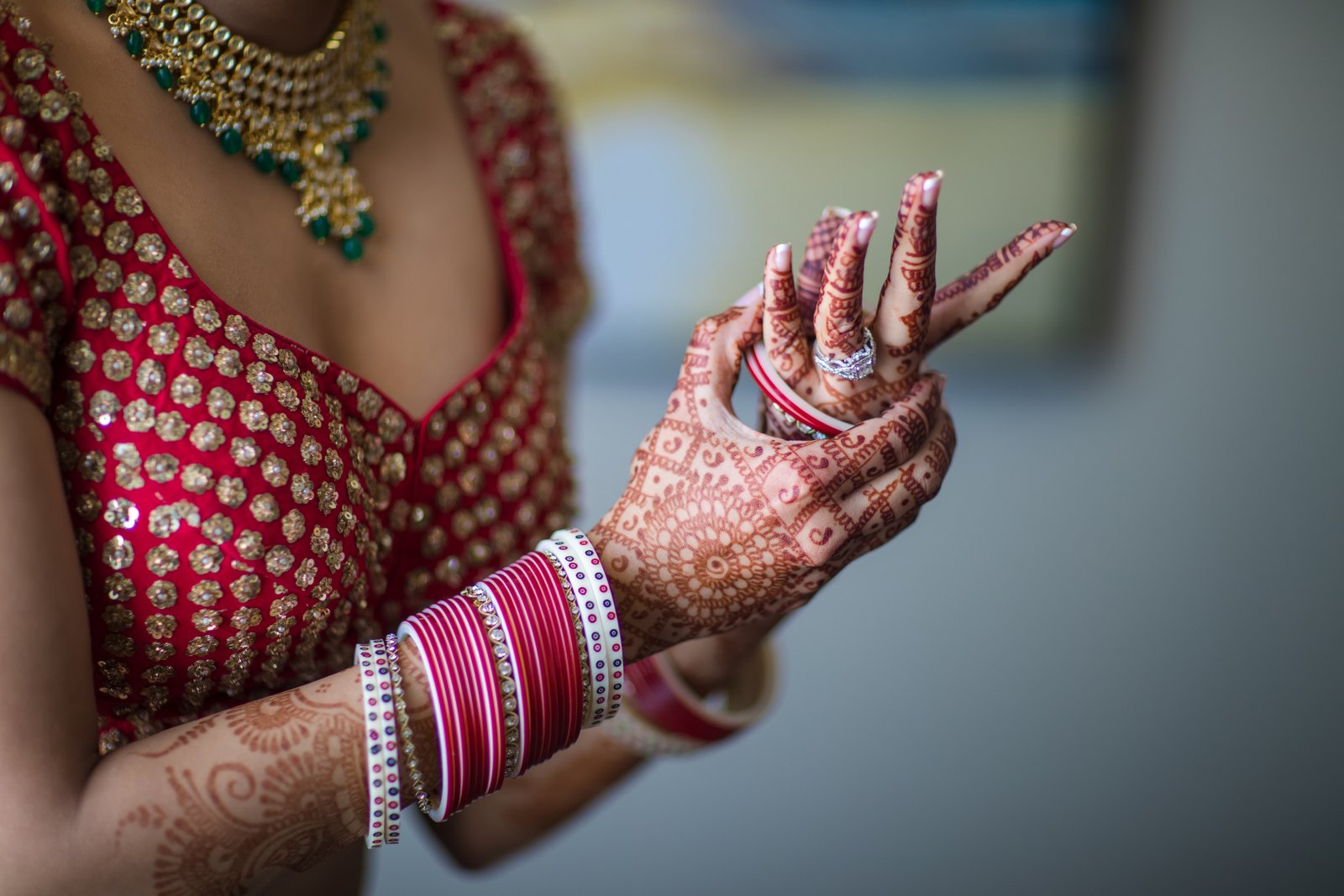 Bridal mehndi has beautiful significance in Indian Marriages. Mehndi is one of the sixteen adornments of the bride referred to as â€œSolah Sringarâ€ in traditional Indian culture and her beauty is considered incomplete without it. It brings prosperity, positivity and good luck. According to the tradition, the bride should not step out of the house after this ceremony. This time also gives the bride much needed rest while listening to prenuptial advice from friends and elders and spend time at home with her loved ones before moving to her new home. The henna paste is also said to cool the bride’s nerves. The leaves of the henna plant have numerous medicinal and healing properties. A wedding, though an occasion filled with happiness does require a lot of planning and care and is a period of anxiety and pressure and creates a lot of stress for the bride. When mehndi is applied on the hands and feet, the nerve-endings cool and the bride feels less stressed. Mehndi has antiseptic properties and helps keeping the bride free from viral diseases, cuts and bruises around the wedding, apart from improving blood circulation. So, essentially mehndi was applied to make sure that the bride was healthy and feeling well. Some of the following beliefs are also associated with Bridal mehndi, it is said that the darkness of theÂ mehndiÂ colour on a brideâ€™s hand represents the deep love between the would-be-couple. Also, theÂ mehndi’sÂ colour also shows the love and understanding between the bride and her mother-in-law. Itâ€™s also considered more auspicious for the newlyweds if mehndi retains colour for long duration. We donâ€™t know if all of this is true or not, however, it is a beautiful feeling to have hopes and thoughts of happiness based on the colour of the mehndi and keeping the spirit of the bride high. The mehndi retains its colour for about 7-10 days from the day of application, generally. Groomsâ€™ name or initials are also included in the bridal mehndi; this is also seen as a subterfuge to let the groom touch the bride’s hands to find his name, thus initiating intimacy. 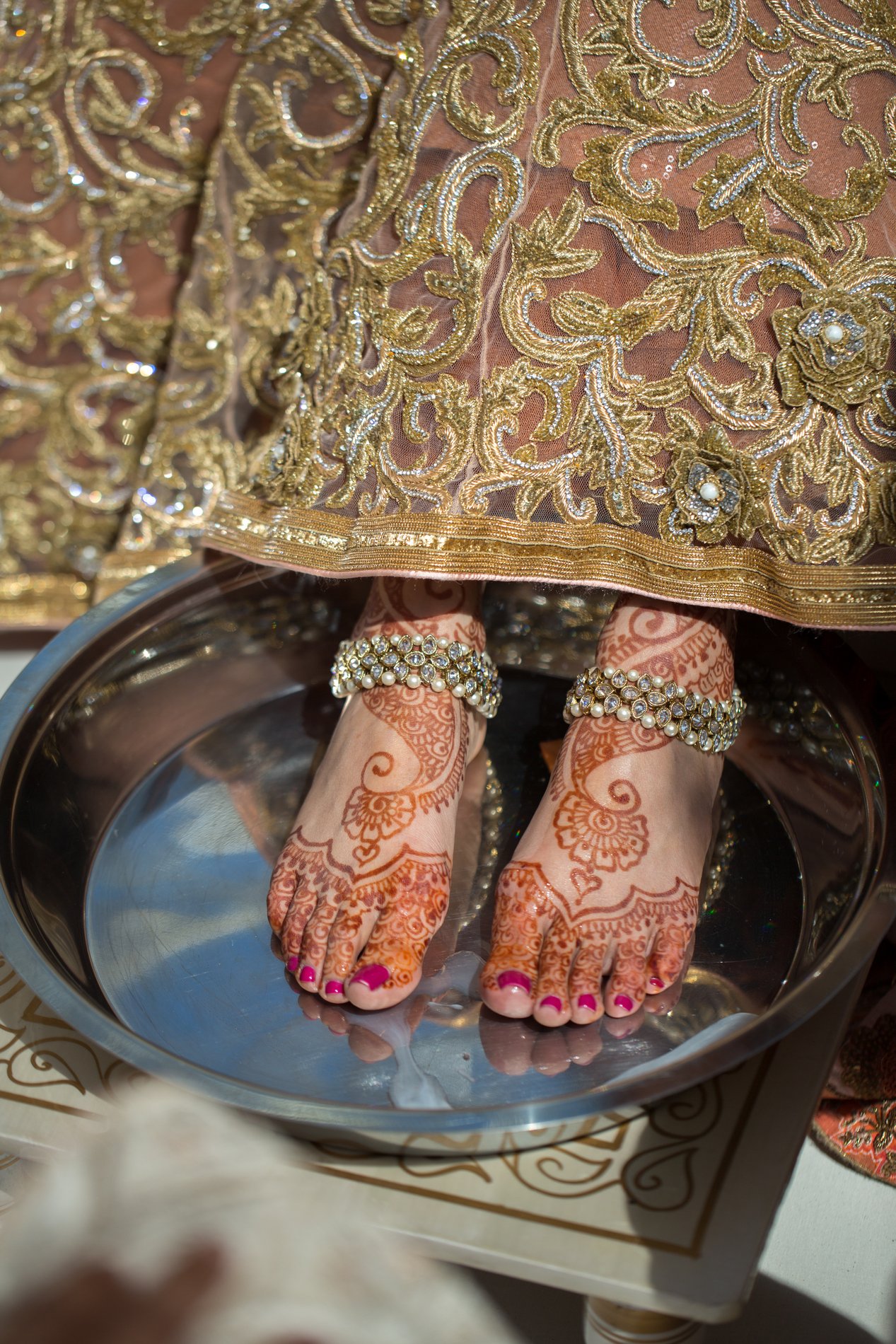 Mehndi for the groom as well! Yes, in some communities, Indian grooms get a mere token of henna on their palm as a mark of good omen. This is applied by family elders as a part of blessing for their married life. The belief is has a deeper significance as Indians and other eastern communities believe this ceremony to be auspicious as it is thought to strengthen the bond between the couple. Deeper colour of the henna signifies immense love from the groom to the bride. MehndiÂ symbolizes the sacred union of marriage and is considered aÂ shagun (sign of good luck) and signifies the love and affection between the couple and their families. MehndiÂ is also considered as a visible representation of fertility. Known for its medicinal properties, it has a cooling effect that soothes stress, headaches and fever andÂ relieves the bride and the groom of all the wedding stress. 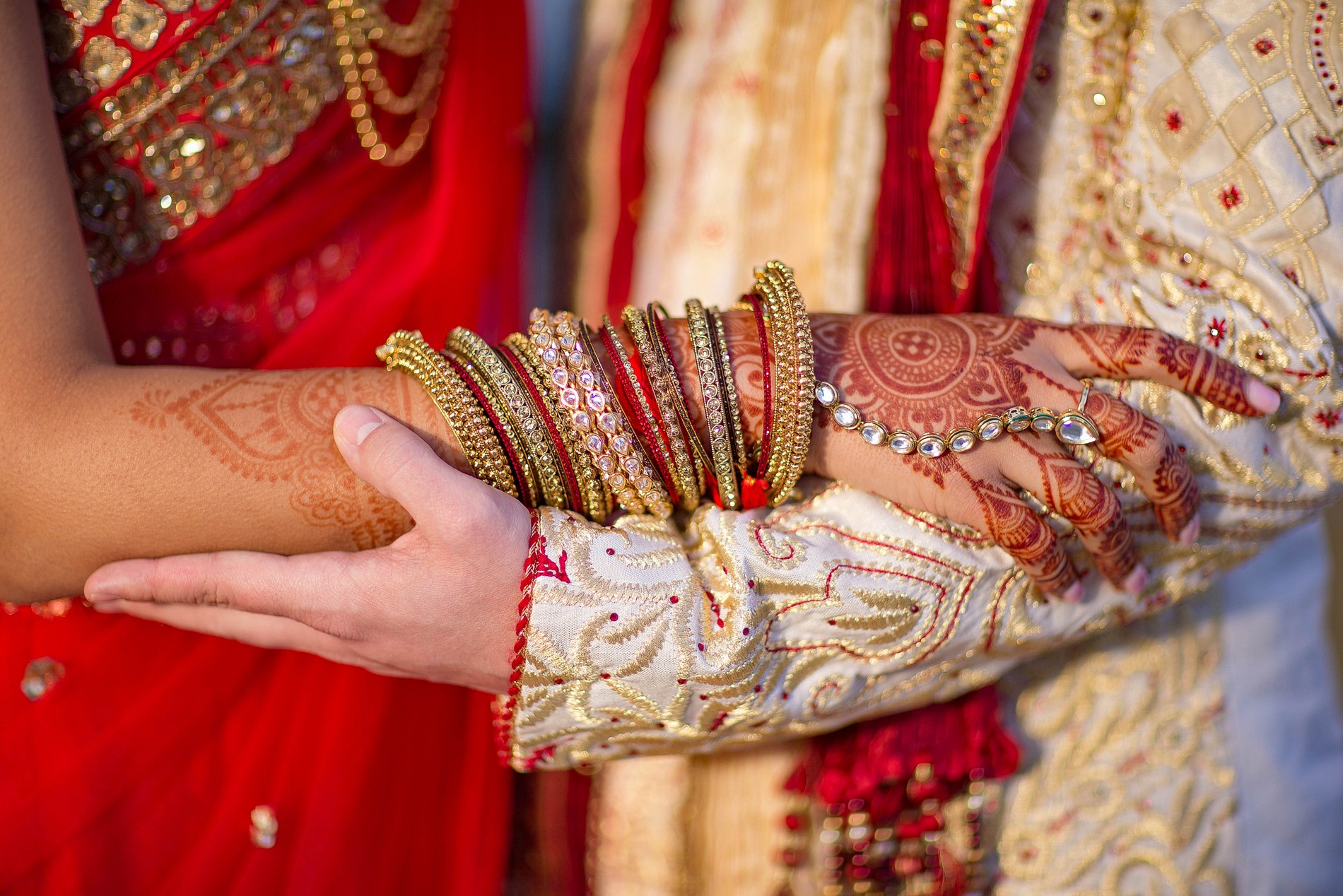 The beautifulÂ mehndiÂ ceremony certainly adds more colours in the wedding celebrations. One of the most important pre-wedding ceremonies inÂ Hindu, Muslim and Sikh weddings, to ring in the festivities, female family members, relatives and friends of the bride also decorate their hands. Usually, the mehndi ceremony is combined with the sangeet ceremony,Â  doubling the celebrations. Traditionally, mehndi was applied by brideâ€™s sisters or female relatives on brideâ€™s hands and feet in the form of some patterns. In present age, the trained Mehndi artists are setting trends in mehndi application, there are so many kinds of mehndi designs to choose from Floral, boho, modern-age or traditional with paisleys, getting your mehndi to represent some important things in your relationship, getting your pictures sketched in your mehndi, the detailing can be endless. Conventional Indian designs include peacock motifs, floral designs, bride/groom replicas and other elements that cover every inch of the hand, forearms, feet and calves. The fingertips are generally covered in thick coats of henna paste and appear full brown after the mehndi is removed. 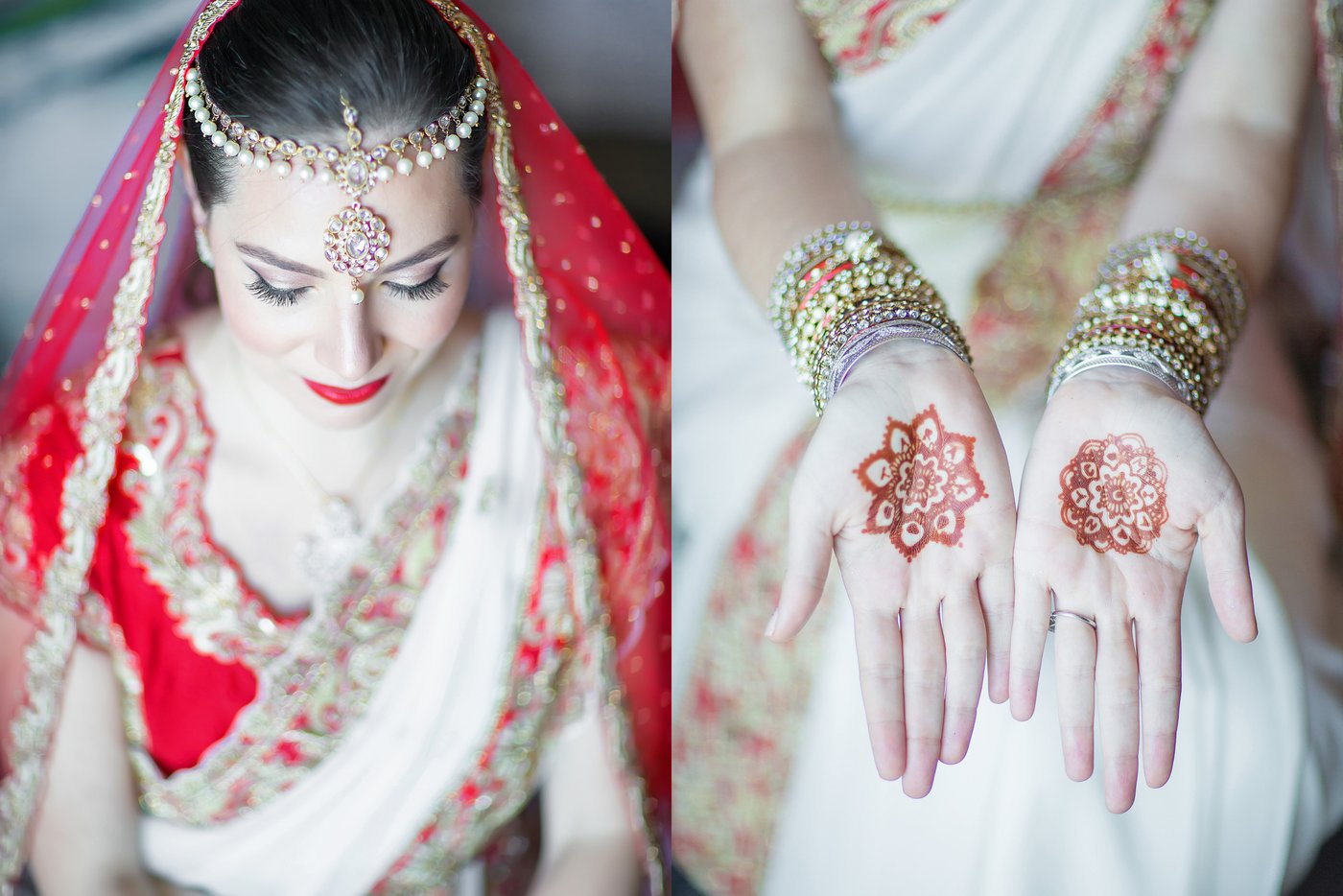 The basic aim is to beautify the brideâ€™s body in replication of expensive Jewellery. If you are looking for minimum mehndi and maximum style choose Arabic designs where the mehndi motifs are generally applied to one side of the hand and feet and do not extend to forearms or calves. Paisley and floral motifs along with some shading stand out in this style and the designs are usually curvy with lots of detailing on vines. Â Indo-Arabic style of Mehndi blends design and styles of Indian and Arabic mehndi into a whole new level of elegance and creativity. Latest trends in bridal henna designs is incorporation of colours in between henna motifs, addition of stones and blings, inclusion of glitters or metallic dusts. Geometric patterns and white henna designs are also in trend. Intricacy and creativity in this field is endless with coming out of great talent as mehndi artists who convert visions into realities and offer a number of options for bride to choose the designs that she wants as bridal mehndi is an integral part of the brideâ€™s identity. You can see more beautiful Indian Mehndi Photos here: Best Indian Wedding Photographers in Florida

You can learn more about Indian wedding traditions here via clicking on these links:

8 Tips to Photograph an Indian Wedding